It's been more than 20 years since VisABLE founded the world's first initiative to create mainstream professional opportunities for actors, presenters and models with disabilities. The result of this is a completely new market which puts disabled artists into the media focus.

The most exciting development has been to capture the global imagination and there is now a worldwide movement for change and inclusiveness, trailblazed by VisABLE... read the rest of the story

A few days after her 18th birthday, Louise Dyson set up a new business... this business became one of the biggest model agencies in the UK, attracting blue chip clients the likes of Tesco, Rolls Royce Motors, Laura Ashley, Next, Hilton Hotels and Barclays Bank. The 'Louise Dyson Agency' supplied models and produced fashion shows for these companies and many more. The Louise Dyson Agency established links with prestigious agencies in Tokyo, Milan, Paris and New York. In order to further her Agency business in Japan, Louise researched Japanese business practices, studied the language and travelled there to make personal contact with the decision makers. With her specialised knowledge of the Japanese market, Louise established the basis for decades of successful business. In the UK she established excellent working relationships with the main 'super-model' agencies of the time, Storm, Models One and Elite, arranging for them to represent her top models in the London market.

- an existing Louise Dyson Agency client, Sunrise Medical, asked for models with genuine disabilities to promote their wheelchairs. As the first request of this nature, not surprisingly, no professional disabled models existed and a competition was suggested to find suitable candidates. Louise Dyson collaborated with Sunrise and DN to plan the UK's first professional model contest for people with disabilities, the 'Sunrise Model in a Million' contest. It was a world first. 1994 - the first model-in-a-million competition attracted some 600+ entries and the finals were held in March. Sixteen finalists competed for prizes which included a modelling contract. Louise chaired a celebrity and fashion industry judging panel, including a Marie Claire fashion editor, a top photographer and Heather Mills. Shannon Murray and Jason Ward were voted the winners Dozens of TV interviews took place with Shannon and Louise as principal interviewees, on programmes as diverse as Good Morning (with Anne & Nick), UK Living, This Morning (with Richard & Judy), The Big Breakfast, Newsroom South East, From The Edge, Kilroy, The Time - The Place, Link, London Today, London Tonight, GMTV, Sky News and the Heaven & Earth Show. Most channels gave coverage at some point. National newspapers, both broadsheet and tabloid, published articles and in some cases major features, on the agency and its models. They included The Independent, The Guardian, The Mail, The Sunday Times, The Sun, The News of the World, plus countless local newspapers in every part of the country. Top fashion and women's magazines published articles too. These included Elle, More, Marie Claire, 19, Woman, Sugar, Cosmopolitan, Time Out, Eva, Best, Bella, Just 17, Red, and even the Spice Girls' fanzine. Three separate TV channels from Germany sent over film crews to record programmes with the models and the agency. These were closely followed by TV channels in Italy, the USA and even Russia. Foreign newspapers and magazines sent correspondents to take pictures and record interviews, for Brazil, Japan, France and Germany. This was just the start of dozens of international media enquiries.

- Louise immediately saw that a much more significant new idea has presented itself. She would now create a market so that all advertisers would address their enormous number of disabled customers by booking models with disabilities. Advertisers would promote their everyday mainstream products and services (everything from shampoo to house insurance) using models with disabilities. This was ground breaking, an opportunity to challenge preconceptions and make permanent changes to the face of advertising. It had never been done...

- September: Louise produced the UK's first professional fashion show entirely featuring wheelchair-user models, at Wembley, where the models presented the latest fashions from NEXT. The BBC spent an entire day filming and broadcast it as their main news feature on every UK news bulletin the next day. 1997 - October: The Leonard Cheshire charity had seen much of the publicity surrounding Louise's disabled models initiative and recognised the attraction for the charity to have involvement in such a media-friendly approach for disability. They asked Louise to jointly organise another modelling competition, for them, as a celebration of their Golden Jubilee the following year.

- The Leonard Cheshire charity received massive publicity as a result of the previous year's competition and decided to repeat the competition with Louise for the next couple of years, with judging panels including top photographer Rankin. A meeting was arranged in London with Leonard Cheshire, together with the Employers' Forum on Disability for a brainstorming session on the best way forward for persuading companies to book disabled models. PR expert Julia Hobsbawm outlined the campaign.

- Louise's original initiative has created a completely new market and put disabled models, actors and television presenters into the media focus. The efforts of VisABLE to attract publicity since 1994 have paid off and now most people will have encountered the idea that professional models with disabilities do exist, paving the way for the BBC3 TV series 'Britain's Missing Top Model' in 2008. VisABLE has shown businesses that it is commercially expedient for them to use disabled people in their advertising. The bonus for them is the social responsibility aspect. In the future all advertisers will make it their policy to include disabled people in their everyday advertising campaigns. Louise's motivation for pioneering the idea has advanced the day where a disabled model advertising shampoo or cornflakes is unremarkable, where models are booked irrespective of a disability. VisABLE also specialises in supplying actors to appear in television drama and comedy roles and have placed long term cast members in Hollyoaks and The Bill, with roles on Eastenders, Holby City, Little Britain, Extras, Casualty, Midsomer Murders, Mitchell & Webb and Doctors. VisABLE have also provided long term TV presenters for CBeebies and CBBC. VisABLE actors have appeared in commercials for TV, cinema, radio, corporate films, feature films and mainstream theatre productions all over the UK.

- VisABLE already receives enquiries from outside the UK, but they plan to expand to every part of the globe. 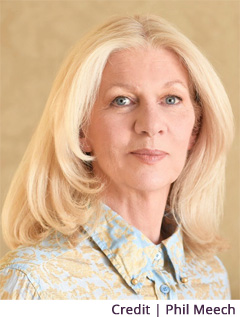 ''The whole point of VisABLE is to persuade advertisers and producers to offer bookings to artists irrespective of the fact that they have characteristics, which distinguish them in the eyes of some people as 'disabled'.

I find the very word 'disabled' very unhelpful and rather dreary and altogether quite laughable that there should be any misconception of inability, in view of the exemplary abilities of the artists I represent at VisABLE.''

''VisABLE is unique in only representing individuals with disabilities for professional assignments and it means that this is the one agency where we see disability as being no disadvantage at all. While respecting particular needs such as access for a wheelchair user or advance possession of scripts for a blind or learning disabled actor, no allowances are made or expected, something I find welcomed by artistes who are fed up with over-polite people anxious not to offend! However, a complete change of public mindset is necessary and the best way as far as I can manage, is to try to get people whose disabilities are irrelevant (although usually evident) into mainstream drama and advertising.

It is only when every member of society is represented in mainstream productions as a matter of course and in ordinary advertising campaigns promoting goods and services, where individuals are portrayed as consumers with spending power that we can hope for any kind of equality, in my view. I long for the day when any producer will call me with a brief requesting someone 'aged 30-40, to be a checkout attendant for a Tesco commercial or to be an accountant or a lawyer for a corporate video' i.e. with no preconceptions about a specific disability. Occasionally this happens but at present all advertisers are on a learning curve and have a long way to go because they do tend to call me with a requirement to represent a particular disability. Although this goes against the grain for me, I am pragmatic about wanting above all, to get people into productions as long as their role is one of empowerment, whether as a consumer or a professional. It has taken me nineteen years so far, to promote the inclusion of the very talented people on my books, into TV, film and advertising and I do believe that the move to include people with disabilities is inexorable and that ultimately it will become totally unremarkable. It is only then that we will have an attitude of acceptance.

I do believe that I have to influence the system from within; it isn't enough to have lots of people in senior positions paying lip service to the idea, which is what I have encountered. I have to make it all as user-friendly as possible in order to get a wedge into the door. I frequently hear from clients with attitudes which leave a great deal to be desired but rather than alienate them by acquainting them with the inadequacy of their approach in a confrontational way, I try to stun them with the professionalism and capabilities of artistes from VisABLE and leave them reviewing their own preconceptions.

Rather controversially, I feel that the campaigns of some charities over the years have actually created a climate of disempowerment by portraying disability with an outstretched palm. My objective is a change of mind set throughout the industry.''

The only reason I created VisABLE is because I have an absolute passion to make this idea work - I really am highly motivated about getting the VisABLE artistes to succeed and this is entirely out of a belief in the enormous importance of making it happen.

Look out for these VisABLE artists...

Sam Barnard
in Casualty on BBC 1

Sam Renke
in the Maltesers commercial

Andrew Mclay
in Another England at the ARC

Hannah Moncur
in The Dumping Ground on CBBC

Di Cram
in The Tunnel on ITV

Emily Howlett
in Tribes at the Crucible

Sam Barnard
in Grantchester on BBC1

Ekow Otoo
in TV Been So Long

Colin Young
in The Dumping Ground on CBBC

Katy Nicholson
in the T-Mobile commercial

Archie Cable
It's My Friday on The Disney Channel

Helen Clyro
in the role of Celia in BBC Doctors

Colin Young
as Jacob in Call the Midwife

James O'Driscoll
as Jack in comedy series Birds of a Feather

Max Lewis
in The Portrait with Joss Ackland and Juliet Stevenson

Tim Baggaley
appearing in the feature film The World's end, with Simon Pegg and Nick Frost

Byron Konizi
appearing as Paul in Casualty on BBC1

William Whittington
in the role of Drew in BBC Casualty

Shannon Murray
in the Richard Curtis film About Time